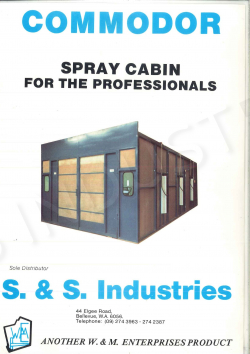 In 1983, Willie Siroen was approached by a family friend named Bill Madlener who owned an engineering business in Bayswater called W&M Enterprises to see if he could manufacture any products that could be on-sold by S&S Industries to the smash repair industry.

Willie came up with the idea of spray booths, so Willie and Bill got together and designed a booth that was of modular construction, in two sizes.  The smaller was named the Capri and the larger one was the Commodor.

Within a short period of time Bill decided to close W&M Enterprises.  Willie could see that there was a need for a locally produced spray booth and wanted to continue on so he purchased the equipment and stock from Bill plus took on one of his staff - Derek Johnson to continue the booth manufacturing on (Derek is still with SpraySafe (WA) today - 34 years later running that division).  The new business was called Compri Enterprises (Commodor-  Capri)

In 1985 Compri won the prestigious Australian Design award for the Commodor & Capri Spray booths and subsequently we were selling 100's of booths all over Australia through out appointed resellers in each state - Crash Supplies in SA - Crash Supplies in Vic - Sydney Autos in NSW - Brisbane Refinish in QLD and of course S&S Industries in WA.

At one stage Compri employed 14 staff at the factory and were producing six booths every fortnight.